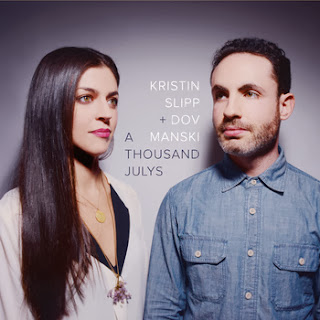 I think I can say the obvious to start off this post without fear that I am being, well, obvious. That is, that an album can be somewhat imperfect and still be interesting and well worth hearing. I would have to say that this applies to the album at hand this morning, namely Kristin Slipp and Dov Manski's A Thousand Julys (Sunnyside 1347).

Kristin Slipp sings, Dov Manski plays piano and a vintage Wurlitzer electric piano. They tackle a bunch of worthy standards, "Smoke Gets in Your Eyes," "I Cover the Waterfront," "Duke Ellington's Sound of Love," "Violets for Your Furs," and so on.

The key here is that the influence of Ran Blake lingers offstage. Like Maestro Blake and his many innovative collaborations with singers from Jeannie Lee on, there is a freely rethought accompaniment (in this case most of the time) with avant or simply improvisationally creative recreations, reharmonizations, re-contextualizations. The singer's role is to give out with the melody line of the song and, as she feels it, vary it with the sort of nuances jazz singers do.

That is what is happening here. They are a couple of younger artists. They are not without what I suppose you could call talent. Manski does interesting things much of the time. Ms. Slipp has a very youthful sounding voice, more in the realm of New Bohemians Edie Brickell than, say, later Billie Holiday. It's a pristine instrument. It sounds innocent, maybe even naive. Now we all know nowadays that virtually nobody who has made it through their teen years, gotten an education (in this case musical) and has been thrown into the world we are all in the middle of, that virtually nobody at that age hasn't experienced some amount of pain and uncertainty. Yet the one thing that struck me first about Kristin's voice is that, in spite of tackling some world weary standards and such, that she does not sound like the world has punched a hole in her well-being. There is a contrast between the lyrics sometimes and her bell-like voice.

And actually that does create something interesting. She is at this point no Billie or Carmen, putting the lyrics so dramatically you KNOW they've lived every minute of it. Well and so? There are opera singers with wonderful voices but a lesser ability to dramatize, to act out what they are singing. Then there are the Maria Callas types, who appear to be living the story out in every note. There is something to be said for an attractive voice that gets so heavily into the notes that the lyrics are downplayed. There is no rule that says we have to put the heart on the sleeve all the time. Sarah Vaughan was an excellent example of a "pipes before lyrics" singer that we can have hardly asked more of, because she had it all in that voice.

Well and so Kristin's voice has a beauty, perhaps not yet a finalized beauty, and a matter-of-factness that when joined with Dov's adventurous pianism makes for a kinetic strangeness. Kristin does take some risks in what she does with a line, too. There is no safety net here so that every shot out of the vocal cannon does not hit dead center. But hey, jazz is the sound of surprise and the courage to be imperfect. So there we are.

All that said I actually found this CD quite interesting. The Mingus gives me a continued appreciation of his genius. And the standards of standard provenance sound fresh. Not perfect. Fresh. OK?

Posted by Grego Applegate Edwards at 7:20 AM