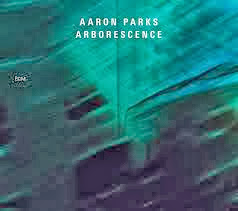 There's a new pianist on the block. Yesterday we discussed Yeawhon Shin, the Korean-born vocalist and her music. On that album was Aaron Parks. Today we have his ECM debut, Arborescence (ECM 2338), an album of improvised solos.

It was recorded recently in Mechanics Hall, Worcester, Mass., with a resonant acoustic that sounds just right for a fine grand piano.

I know you all (likely) know Keith Jarrett's style of solo piano improvisations. Aaron does not sound like him. In a way, the sometimes Neo-Romantic sound of Keith is supplanted by Aaron's almost Neo-Impressionism. He is a player of filtered light, of early spring, of solitude that consoles, of brightness, yet of strength, like a mighty oak when he needs to express that.

The music sings. He is a melodist and a harmonicist of excellence, of talent, of halls of mirrors reflecting the morning sun.

It is an experience, hearing this fine young fellow create beauty out of imagination. If you like music of poetic substance that glows with listening-friendly warmth, without resorting to pap, this one is for you!