Jon Irabagon, It Takes All Kinds 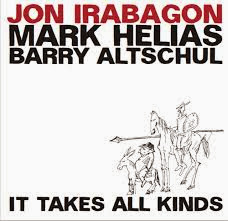 Jon Irabagon plays sax like he's been through the style wars and has emerged catalysed and all the better for it. But he's too young to have been on the frontlines then. Yet somehow he's internalized the insightful lessons gained by assimilating the sounds that went before and melding them into his own very alive approach. What makes him so important today is not just that he goes in his own way where he will, but that there is more than one Irabagon. There's Irabagon the over-the-top dionysian bebop mad-hatter like on the full length version of Doxy he did a few years ago. There's the jokester that still takes it outside like on Lundbom's Big Five Chord, and there's the player of many voices who rechannels it all in Mostly Other People Do the Killing.

And today, another Irabagon, that of the serious new-new thing artist on It Takes All Kinds (Irabagast Jazzwerkstatt 139). This is a live trio date at a German festival last year. And it is excellent going. First of all Barry Altschul has been playing with Jon for a while now and it is paying off big in interactions. Barry sounds like his old self with that orchestral-but-swinging drum thing he was doing with Circle, Sam and Anthony Braxton way back. Only he has the maturity of time and growth in plain evidence. In other words he sounds as good as ever! Mark Helias has been playing off and on with Barry for years and so he too has a maturity of association added on to a tremendous sense of space and place in his playing.

This is Jon's date so they do Jon's tunes--which have a bop and after completeness-in-change feel to them. And his playing gives nods to the greats of the past but also gets very much his own multi-dimensional phrasings happening. He is part of a continuum, but a step of his own, which is of course much the way things evolve when they do.

In a way, a very healthy way, this music sums up why the style wars of the '80s and after were bullcrap. There was nothing to challenge. The music was growing, is growing and must not be stopped. So here we are today with how that growth leads to new-in-old and new-in-new classicism, whatever that means. But no, really. It's how the free movement and the past can hook up and move on. One way, anyway. Connie Crothers the other day is another. There are many ways, potentially and in actuality.

Jon's playing is definitive of that. So is Barry's. And so is Mark's. This is a trio of importance playing music that affirms that jazz lives and does so strongly, right in the present. We don't need our heads buried in the sand. Listen!

Labels: barry altschul, free jazz and beyond the past, jon irabagon it takes all kinds gapplegate music review, mark helias, modern avant jazz, the present through the past and back