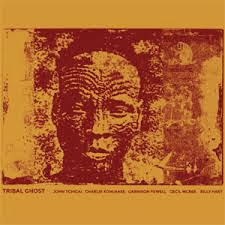 The fact that the world lost saxophonist John Tchicai well over a year ago (October 2012) hadn't quite hit me until I heard the new posthumously released album Tribal Ghost (New Business LP65). It's not that I did not miss him as much as I hadn't internalized the loss.

Now that I've been living with this newly issued 2007 recording I feel it more keenly. He was to me an epitomization of the creative artists, the avant jazzman who could and did explore all kinds of territory, from the early pioneering new thing music of Shepp's NY Contemporary Five and the NY Art Quartet, to Ascension, to the post-thing Afro-exuberance of Pierre Dorge and New Jungle Orchestra, to his own varied later groups. He was not just an excellent alto-tenorist; he was a force in music.

Tribal Ghost reemphasizes that to me. It is also an excellent album. John plays tenor and a bit of bass clarinet (and chimes in with one composition), Garrison Fewell plays electric guitar and percussion (and contributes three of four compositions), Charlie Kohlhase is on alto, tenor and baritone, Cecil McBee is the bassist and Billy Hart is on drums. Now that is a group! The compositions center it all and give structure--and so this is not precisely a "free" date as it is an avant date.

The compositions and the mix of smart playing put this one in excellent territory. There is dramatic interplay, collectively, good individual performances, and a pacing and momentum that keep your ears open and attentive.

This is not the last word on John Tchicai or anybody else here. The fact that it isn't is in part why John was important. He encompassed so much. And so does everyone else on this date.

Definitely get this one if you can. It is a delight.