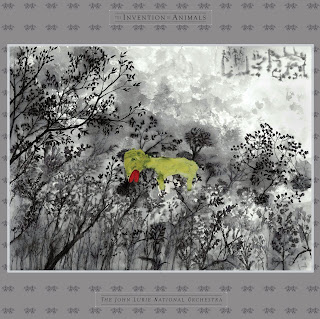 John Lurie and his Lounge Lizard group made some of the most innovative group jazz of the '80s and '90s. If you never heard the music you should. At some point John began experiencing complications from late-stage Lyme Disease (which needs to be better understood and recognized for the severe debilitation it often can be) and could no longer play. He's been doing wonderful paintings, though, in a style as uniquely his as his music.

But before all this, sometime between the Lizards' heights and now, he did some trio work with Calvin Weston, drums, and Billy Martin, percussion. They dubbed themselves the John Lurie National Orchestra and fortunately put some of their excursions onto tape.

The Invention of Animals (Amulet Records) gives you 40 minutes of it. It's John on soprano giving out with his intricate kind of Mbuti Afro-solo and outer realms improvisations while Calvin and Billy lay down some good rocking Afro drums.

It's pared down Lurie but no less interesting. That's why you should get it. I am not telling you what to do, but no kidding, this is good music!