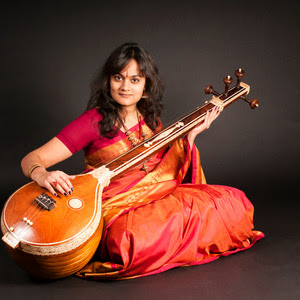 Deepti Navaratna is a very good Carnatic (South) Indian vocalist, an All-India Radio artist since 2000. She does a nice job combining East and West as well as Carnatic and Hindustani on her new album Ka (self released).

Her voice is magical, very nuanced in the classical tradition, and quite memorable. On this album she begins in a traditional vein with voice, tamboura and violin, then goes on to combine traditional with contemporary--arrangements of substance with a touch of polyphony, ensemble performances that sound like they may have been derived from Vedic chant, plus other imaginative touches for some groundbreaking, form creating music.

After the thirty-minute EP ends you will want more, if you are like me. This is most fascinating music by a true artist and stylistic innovator.