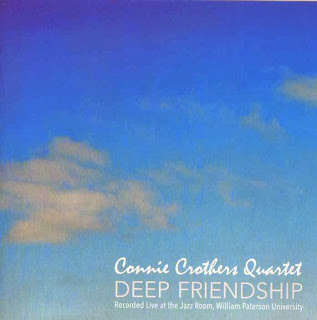 Connie Crothers has been making seminal new/avant jazz for many decades. And there is no excuse if she doesn't always get the recognition in the press she so deserves. It's all laid out in the recordings and you can catch her live in and around the city (New York).

She has a new album out that, after some quite exciting and engaging duets with some brilliant players, returns to her classic quartet. They played a set at the Jazz Room, William Paterson University in NJ, in 2010. Fortunately it was well recorded and the results are for us to appreciate in Deep Friendship (New Artists 1058).

This is the band best known for its freebop demeanor. That means that the music is outside the mainstream but has deep bop roots. Long-time Crothers associate Richard Tabnik blazes on alto sax. Even longer-time band member Roger Mancuso plays a loosely swinging set of drums. And Ken Filiano, a bassist known and appreciated for his work with Connie and others as well, is a key part as he has been for a while.

So why is this something to hear? It's some intricately hip after-bop numbers--three by Connie and two by Richard. They have been done before on earlier albums, but that in jazz just means they are serving as the springboard for a fresh improvisatory outlook, which is as true of this group as it is of any.

Richard blazes as a relative of Bird who has built his own nest--in other words, post-Bird. Ken walks beautifully and plays some excellent solos, too. Roger kicks out the jams both in time and in solo.

But I find myself on this album especially listening to what Connie is doing. When she comps the harmonies are thickened, sometimes to the point that they are flat-out clusters of dissonance and then, no, you get your bearings with some very rootsy chordal voicings and all in a flow that shows the deep, deep roots she has in the tradition but how much she pushes that tradition to the edge. That is what good freebop should do but often doesn't quite. With Ms. Crothers and the band they do so without fail. And Connie's solos show that too only perhaps even more so.

No one plays like this out there except Connie. Others may get in that zone but she is way ahead of them all when it comes to extensions and transformations of what has gone before.

Everything clicks on Deep Friendship. Connie shows us that she is at the top of the game. So do yourself a favor and dig in to this one! My highest recommendation for this one--and Matthew Shipp's from the other day. For the piano these are two sides to a brilliant coin. Years from now people are going to be kicking themselves saying, "why didn't I get with this music sooner?" Now is the time.