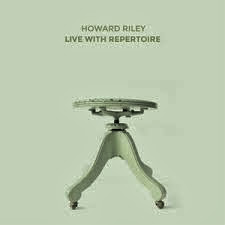 It's great to hear a player like Howard Riley, pianist-artist of real stature, in the course of doing these reviews. Here's somebody I knew little of before his CD (No Business NBCD 58) Live with Repertoire. I am very glad to hear him in depth, inspired as he was on this release. It was recorded live before an audience. As Howard explains, his gigs he approaches in one of three ways, with spontaneous freedom, with that and some compositional guideposts, or "with repertoire," that is, centered around songs and compositions.

The performance at hand is almost entirely of the latter sort. This is a date where Howard digs into the music by and/or associated with the evergreen Thelonious Monk. So we get "Well You Needn't" but also "Darn that Dream" and a bunch of others, as well as Howard getting in some improvisatory and compositional moments of his own where he comments on it all.

What's so nice to hear is the way Riley channels the Monk sensibility, the wonderful percussiveness, the adventures in harmony, the forward moving lines, all that went into Monk's playing. Howard, most importantly, makes something of it that is Howard Riley. It's more, then, than channeling. It's a remaking.

And it gives you an idea of how much Howard Riley appreciates, loves and has grown through the Monk way, but also how much Howard does it all by being Howard. There is originality in there. It's very much a beautiful experience digging on this album.

Monk! Howard Riley! Put yourself inside the piano and enjoy.