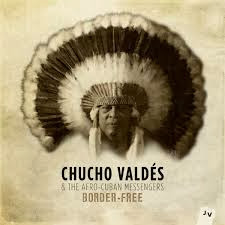 Chucho Valdes and his Afro-Cuban Messengers blaze through one hell of a Latin Jazz set on their album Border-Free (Jazz Village). He won a Grammy last time out and this one does not flag. The Cuban piano giant comes through with some originals and in tandem with his rhythm section they burn with brilliance.

Listening, you hear the jazz roots and feel the Cuban rhythm down to your toes. His website mentions that he has been influenced by Moroccan Gnawa music and, yes, that comes through in some of the heated riffing. Flamenco also has influenced him, the site says, and, yes, there is a certain flair in phrasing that has a similar thrust. As for the rest this is Afro-Cuban jazz as a tour de force. Branford Marsalis guests on three cuts with excellent outcome.

Beyond that Chucho shows you what he is made of here. And that is thrilling!

Posted by Grego Applegate Edwards at 9:35 AM