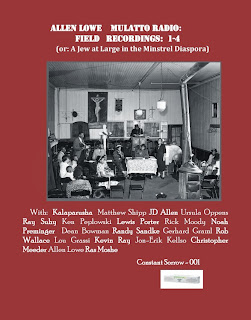 What do you say about a hugely ambitious and largely very successful project of the breadth and girth of Allen Lowe's Mulatto Radio: Field Recordings 1-4 (Constant Sorrow 101, 4-CDs), which is subtitled A Jew at Large in the Minstrel Diaspora? Even this subtitle would take many pages to unravel, something best done by Allen Lowe himself in a book. In fact the accompanying booklet goes some length in explaining what all that might mean. As with Allen in general it is outspoken and perhaps controversial, one of those things that you can be essentially correct about (assuming that) and open yourself up to a veritable shooting gallery nonetheless, with you as one of the mechanical ducks.

What matters at this point in time for me is the music--and as for that, I hear what is going on in this vast collation and I approve. Not that anybody needs my approval here. Judging things I tend to do almost involuntarily, so there you go. But I suppose that is partly the point of these blogs.

Allen was spurred on by his thoughts to immerse himself in early jazz in its surroundings in not-quite-jazz, roots and what you might term pop from the olden times. He emerges from that exploration with a sequel to his blues set (look him up in the search box for that review).

The 4-CD set contains a wealth of Lowe compositions that start with an early jazz feel and wind their way through Monk and Mingus influences while always keeping an out/avant stance that at times very much comes to the fore, other times is strongly implied. There is plenty of room for improvisation and Allen gets a fair amount of time to show us that his alto playing is something to listen closely to, to pay attention to....Now I may hear everything from Frankie Trumbauer to John Handy, Jackie Mclean, Ornette, and others--but it's Allen's very thorough immersion that puts those influences into a mix that is all his. The compositions do that, too.

And then he has chosen the players here very well. Kalapurusha makes a golden appearance, perhaps his last date before we lost him? The saxes in general get some excellent things going. Ras Moshe sounds great. But close behind him are Noah Preminger and JD Allen. The piano chair is enlivened in some very different ways by the likes of Matthew Shipp, Lewis Porter, and Ursula Oppens, depending what is needed for the piece at hand. Then of all people Ken Peplowski on clarinet, who plays impeccable Peplowski. Ray Suhy gets a chance to play some very interestingly out guitar and on banjo straddles the old-ways and outness. I can't list everybody here but Lou Grassi plays a good role on the drums while Rob Wallace plays a good roll. They both have roles to play and play it they do. Kellso and Sandke do justice to the trumpet requirements and take interesting solos. Then there is a tuba player, Christopher Meeder who gives you the old style and the post-Draper outness too. OK there are others and I am sorry to leave them out, but nobody sounds like they do not belong.

Allen gets a good balance between the compositional and the improvisational--and this is significant fare on both sides. There is the old and the out, again in balance. Imagine Mingus and his Blues and Roots album, only it isn't Mingus and it's right now, like 2013, and it's what Allen creates out of the past and what these excellent players do with it. "My Jelly Roll Soul" did something that can be done again, only subject to what's happened since. And done differently, no less originally. That.

That's what this is.

And after a first, thorough immersion I must say that it's music I want to return to frequently because it's real. There is nothing of the rehash about it. There's no doubt, there isn't any attempt really at literal recreation or some strict form of authenticity. An authenticity of repertoire is not there, and that's what makes it so interesting to hear. Because, face it, the original recordings of the styles treated are where you need to go. Then this becomes comprehensible, but not because it wants to BE that music; but rather it wants to comment on it and further the music of today in the process. (Even if you don't know well the early styles commented on in these "grooves" you still can dig in and dig.) And at the same time I am not saying that all repertoire projects are misguided. There are some great ones that make sense but this is not what this is.

That's what I get out of this. There is no controversy with the music. It's just good music. Is there too much? Only if you don't have any listening time. It requires that, certainly. It's out music that dives deeply into roots but does not wish to become those roots. The compositions and the players are what is happening NOW. And it's a very, very good thing. So, encore.

Posted by Grego Applegate Edwards at 6:56 AM