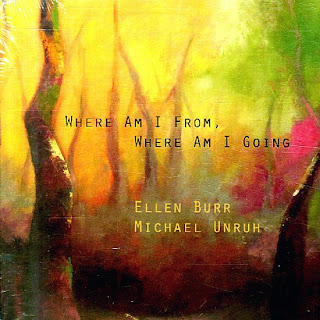 In the days when record stores ruled, when record hunting consisted of pouring through bins of records in search of both the known and the unknown, the recording up today would probably not normally have been stocked in the typical jazz stacks, unless you went to a large "full-line" store. And you might have overlooked it.

Today things (for better and worse) are different. People like me cover music that interests those who seek a particular style set. The music may be totally obscure or well-known but releases stand a better chance of review than they might have 30 years ago. Going to the relevant web site to buy such recordings is just a matter of typing in an IP address and going from there. But then the possibility of an unknown artist getting lost in the thickets of the web maze is quite real, too, unfortunately.

And so I present to you the music of Ellen Burr and Michael Unruh, perhaps not people you know of. Their free avant woodwind duet set, Where Am I From, Where Am I Going (pfMentum CD076), is unlikely to unleash a tidal-wave of acclaim and popularity, in part because of the newness of the names, in part for the uncompromising nature of the music. Ellen Burr plays flute, alto flute and piccolo; Michael Unruh the bass clarinet.

For seventy or so minutes they unleash their imaginative and technical powers in a series of 15 duets. It is music of a completely free nature, traversing territory both charted and uncharted, filled with energy and sound colors, weaving a contrapuntal tapestry of sounds that gets to you if you let yourself go and allow a willful selflessness, an immersion in the spontaneous effusions.

When I was much younger I remember a Downbeat review of an ESP disk called Free Music that the reviewer rated with five stars/no stars, symbolically and in fact concluding that there was no way to evaluate such music. It was a cop-out then and it is a cop-out now. If you don't like free music then you have no business reviewing it, unless you want to use the review as a platform to warn the unwary listener that they will be thrown willy nilly into a maelstrom of chaos.

As anybody who reads these blogs knows I do champion free music among other things. This series of duets has integrity, thoughtful creativity and a sense of form and style built-in to the mix. And so I do recommend it to you. It may not be my first choice among such disks thus far this year, but it is quite worthy of your attention. Recommended.

Labels: duets for flutes and bass clarinet, ellen burr and michael unruh where am i from where am i going gapplegate music review, free improvisation, free jazz, us avant jazz