Ravi Shankar, Milestones, A Primer to the Maestro's Music 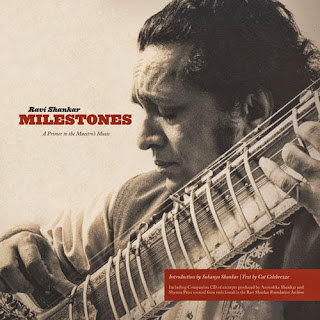 In honor of what would have been Ravi Shankar's 94th birthday East Meets West Music has released a CD and accompanying booklet that surveys the maestro's career in its many facets. Milestones (East Meets West) gives us a full CD with a myriad of different elements of the maestro's music. It is part of the Shankar Foundation's Access Raga initiative, which has as its ultimate goal the digitizing of as many of Shankar's analog recordings as possible.

The recording spans the period between 1950 and 2011, with raga performances, movie soundtracks, his compositional projects, excerpts of him teaching, and even a bhajan set to lyrics in English. Some of these examples are quite obscure, others less so. All of it is worthwhile, indispensable for Shankar adepts.

Of course this is not meant to replace or substitute for the long performances of ragas in context, something that is central to his art. But it gives you a taste of his musical personality, his genius over a long period of time.

Listen and enrich yourself!

Posted by Grego Applegate Edwards at 5:19 AM