Rich Halley 4, The Wisdom of Rocks 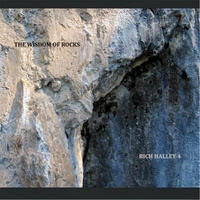 West Coast tenor titan Rich Halley returns with further good developments from his now solidly congealed Rich Halley 4 quartet. The Wisdom of Rocks (Pine Eagle 006) seems aptly named in that rocks stay put, weather the storm, become at times all the better for it, with rough edges made more attractively smooth. Perhaps that is pushing it as far as rocks are concerned, but it is fitting for Halley's foursome. But of course I do not mean to say that the group plays smooth jazz! They are lively and still something rough in a very healthy, spontaneous way. But they are rock-solid, more and more as time passes.

As has been the case for a while now the quartet consists of course of Rich on tenor, Michael Vlatkovich on his prolific trombone, Clyde Reed on bass and Rich's son Carson Halley on drums.

The ravages of time have not adversely affected the group. They continue to grow together and make of the four-way dialogue something more and more poignant.

The compositions are mostly by Rich, with one by Rich and Carson and three as collective endeavors by the entire quartet. The song structures set the table and get the band moving in nice ways, whether in a swinging post-new-thing way, as a ballad or with a straight-eight open rock freedom.

Rich and Michael as can be expected turn in some formidable solos and the entire band cooks it all to a fine stew of excitement and dynamics.

If you don't have anything by this edition of the quartet this is a good one with which to start. If you know them this will confirm their stature as one of the very happening things on the West Coast. Listen and dig (you will).