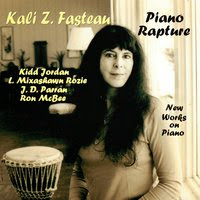 Kali. Z. Fasteau, a real, totalized phenomenon in avant jazz circles. . . .She's played with all kinds of seminal avantists, beginning pretty long ago with Donald Rafael Garrett and on from there with a host of heavies. She has more than endured those years, she has flourished as a multi-instrumentalist and leader who coaxes the best from her collaborators and then contributes her own very effectively distinctive playing to boot, whether it's from an array of reeds, vocals, piano, you name it.

She's produced twenty-something albums independently, and regular readers should recognize that I've covered many of them on these pages (type her name in the search box above for that). She never backs down, she always comes through. And her latest, Piano Rapture (Flying Note FNCD 9016), happens to be one of her very best.

It as the title suggests features Kali's piano playing, in solo and duet (and one trio) with some notable improvisors--Kidd Jordan on tenor; L. Mixashawn Rozie on soprano, tenor, flute and djembe; J. D. Parran on alto flute and alto clarinet; and Ron McBee on percussion.

These are free pieces, spontaneously composed by the artists on the spot. Kali's piano playing never sounded better. She cascades, drones, splashes multi-note bursts of sound on the keyboard like paint onto a canvas, and otherwise creatively sounds out very moving and appropriate sound-poems whether in the company of her considerably talented collaborators or by herself.

One of the most moving pieces on the album is "Roy's Wake", a live expression of grief, sorrow and spiritual transcendence on the tragic death of trumpet master Roy Campbell. His sudden passing shocked and deeply saddened the New York jazz community when it came early this year and she movingly expresses that on vocals, electric organ and electric piano while Mixashawn ably seconds the emotion on flute and soprano.

But all of it goes together in one absorbing flow. The relatively short length of each piece and the constantly shifting configurations make listening closely both easy and very rewarding. If it's right to speak of masterpieces only a few days after they have come out, this is surely one of Kali's--a masterpiece in the open-form free-jazz she was been such a vibrant force in and such an important part of for so long. With Kali, technique has always been thoroughly harnessed to the directional momentum of free expression. Never more movingly so than here. Hear.