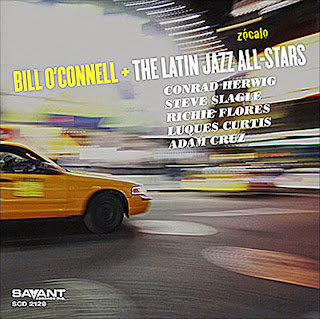 Better late than never. I was happily pummeled with music over the regular season and since there is only one of me I could not get to all of the good ones fast enough. So I am catching up today with one I wanted to cover earlier, pianist Bill O'Connell and The Latin Jazz All-Stars (Savant 2129).

It achieves a rather big sound with a sextet, thanks in part to the arrangements but also to the clout of the individual players. Connell does those arrangements and they toggle nicely between hard bop/post bop and a Latin groove. He also plays exemplary piano that covers well the expectations of the percussive block Latin piano style and then comes through with some very hard-charging solos that channel a Tyneresque left hand with some fleet and hip right-hand runs.

With him are Steve Slagle on soprano and alto, Conrad Herwig on trombone, with a potent rhythm section of Richie Flores on conga, Luques Curtis on bass and Adam Cruz on the drums. They are joined with bata drumming by Roman Diaz and Diego Lopez and vocals by Diaz and Jadele MacPherson for a very hip Latin arrangement of Victor Feldman's classic "Joshua". Bill O'Connell's nicely appropriate originals form the bulk of the music otherwise, with a couple more standards for good measure.

O'Connell, Slagle and Herwig give us some advanced modern soloing and the rhythm section cooks and churns out the Latin grooves with all the power you'd hope for.

In the end this is a very nifty Latin jazz album for both its Latin and its jazz. The balance is there and apparently they took down the "no smoking" signs in the studio, for they all smoke! Get into this one and you'll be smiling pretty rapidly.