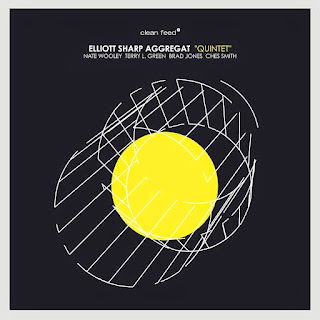 Elliott Sharp has made his reputation as an avant and, yes, a blues guitarist and jazz composer of complete originality. In the early days he appeared on winds mostly as a realization of compositional objectives, not as much as a soloist per se. But lately he has taken on the wind playing role rather seriously. The CD up today gives you some of that with his group Aggregat and album "Quintet" (Clean Feed 288CD).

Elliott mans the tenor and soprano saxes and bass clarinet like he was born to it. There is originality and there is a noteful flow. He is joined by Nate Wooley on trumpet, Terry L. Green on trombone, Brad Jones on contrabass and Ches Smith on drums. This is an extraordinarily capable outfit and the avant, open-form free jazz that results has both compositional clout and expressive collective and individual improvisations worthy of your attention.

There is a new new thing out rootsiness underpinning the music that then gets transformed and reworked the Elliott Sharp way, meaning that it has the originality we expect from him, but less of the sensory-motor machine-poetry of his earlier work and more of a collective series of clamorous pivot points that show excellence in their collective improv qualities yet also have structured articulations of a compositional nature.

Everyone here is beautifully creative within the structures set down and capable of a personally inventive absolute freedom as well.

The music is serious in the best sense--buoyantly expressive with structural smarts.

I'd say it was a milestone but I suspect Elliott has more coming in this vein, so I'd better say that this is some breakthrough outness. Heartily recommended for those who like their jazz on the edge, warm and collectively boisterous.

Posted by Grego Applegate Edwards at 5:38 AM