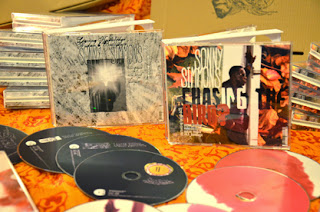 When the album up today came in the mail I was astounded. "So it's true! Eight CDs of Sonny Simmons!" Yep, that's right! Leaving Knowledge, Wisdom and Brilliance / Chasing the Bird? (Improvising Beings 8-CDs).

So I listened. Damn! This is music that is all over the place with, happily, no peghole to shove it into! The personnel is of course Sonny on cor anglais (English horn) and alto sax, Bruno Gregoire on percussion, Anton Mobin on prepared chambers, AKA_Bondage on prepared guitar, Michel Kristof on electrified Indian instruments and electric guitar, and Julien Palomo on keyboards.

But what music is this? From 2006 to 2014 the recorders were running for sessions where everything went. It straddles the fence between new music. electronic music, ethnic music, free music, East-meets-West music, psychedelic music, and everything in between.

It's way too much to absorb immediately, but you know after listening to everything a couple of times that this is music of a very unbuttoned sort, fascinating and possibly even at times exceptional, beautiful, out, raw and yet virtuous in its refusal to be nailed to a genre wall.

Sonny does not play much in the firey, notey way that established him. But every note counts. And really this is Sonny AND, not just Sonny.

I wont tell you what to think. This one demands your attention. I still plan to go back and listen to each disk thoroughly a bunch of times, because it all kicks you in the tail at first so you must clear your head and hear again.

If you don't like out music that breaks out of the free jazz mode into unknown territory and/or if you don't like electric and acoustic outness combined, this may annoy you. One thing it isn't is self-indulgent. But it IS very much experimental. Everything is meant but there are times when the music is running on intuition. And perhaps not everything is a masterpiece, but how many times is that going to happen on a set like this? It may annoy you, but if that is the case, I say respectfully that you are the problem. The music doesn't elicit that in the least.

So if you are ready to follow Sonny into a new kind of musical abysse, get it! If you know what you want but you don't know exactly what that is, get it. You wont be disappointed, I believe. But you will have plenty of listening work to do. Get it, hammer a Men (and Women) at Work sign onto your door and go to it!