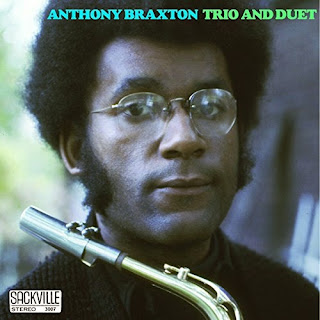 It's hard to believe now how much controversy surrounded the emergence of Anthony Braxton as an artist in his early days. I can remember a blindfold test where a prominent artist was played For Alto and the extraordinarily hostility that music evoked. And in the years following there were a fair number of detractors with bad things to say of his approach to traditional jazz repertoire, where he most certainly followed his own muse rather than what was considered necessary when playing on the changes. He approached the harmonic structures obliquely, sometimes seemingly disregarding them altogether. That was capital heresy then. Similarly his work in the realm of "new music" composition met with disapproval from a vocal contingency.

The album reissue up today, Braxton's Trio and Duet (Sackville-Delmark 3007) bring us to his work in 1974, when the controversy most certainly still reigned. It is again very available thanks to Delmark's Sackville reissues. When we listen with fresh ears now we realize that the musical daring of that mid-early period has largely been assimilated into the avant-mainstream today. Braxton has prevailed. That doesn't mean that there are not some out there who disapprove. But even late Coltrane still seems controversial to some.

For the contemporary new jazz-new music world, Braxton has won.

So nonetheless it is good to hear this mid-seventies release for all the young-lion exhilaration that it contains. Half of the album is devoted to the abstract trio piece that has all the markings of Anthony's more ambitious compositional adventures of the period. Braxton on reeds, a still-young Wadada Leo Smith on trumpet and Richard Teitelbaum on synthesizer go through the composed-improvised sectors of the composition and show us how seamless the two aspects had become. It is a beautiful work, beautifully performed. So much that came later was influenced by this chamber-avant approach that we forget how daring it was at the time.

The second half of the album is Braxton on alto and Dave Holland on bass running through a series of jazz standards. The reissue gives us two additional cuts for a good twenty minutes of more music. These explorations no longer seem shocking to us, partially because so many have followed in Braxton's path by bringing a personal way around changes that it seems as legitimate as it most certainly is. Holland sounds fantastic in the manner he then straddled cogent walking with an abstract solo style that was highly original and very noteful. Indeed, even Dave himself no longer sounds like this. Anthony is very much into his way with the tradition at the point of this recording and sounds uniquely himself, like no other, blistering and iconoclastic.

There have been so many Braxton albums that it is easy to neglect this one. Hearing it again after so many years it sounds better than ever to me. It is one to discover, to re-discover, and to appreciate. Braxton's artistry is well at a first-period peak and his colleagues sound beautiful, too. Grab this one for an excellent example of Braxton in 1974.