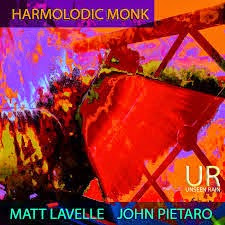 The music of Thelonious Monk, if anything, has taken on increasing stature as a body of compositions central to the modern jazz experience. In the period following his leaving us, we see renewed attention to his recordings and a great array of contemporary jazz musicians who perform his music regularly. Steve Lacy was a pioneer in adventurously featuring Monk's compositions long before it was fashionable. Nowadays his recordings of Thelonious's music have achieved classic status.

Yet with the unforgettable melodic and harmonic qualities of his music there is always room for further explorations. It may not be a simple matter to make out of music so well known and widely played something very fresh. Matt Lavelle and John Pietaro have done just that with their album Harmolodic Monk (UR Unseen Rain 9953).

The "Harmolodic" reference goes back to Ornette Coleman and his approach, specifically his freedom to go out of the expected key centers or improvisations around chord changes to modulate or introduce notes outside of the usual frame of tonal reference. It's more than that but for now that will do. Matt and John approach the Monk material freely in this way, so they can stick to a tonality or general chord sequence and they freely can go outside of it, and that's what they do and do well.

Matt and John take various approaches to the Monk pieces. Matt on trumpet, flugel and alto clarinet and John on vibes, congas, bodhran and percussion can lope along in tempo, play within the general harmonic structures or advance outwards, go for freetime multitempos or articulate in open tempo with solo horn or vibes, or in tandem.

Matt gives us his beautiful take on a classic burnished tone for his trumpet and flugel playing or he can go for a more punchy, brash sound when he feels the need to energize. He sounds quite well on the alto clarinet too, an instrument he has recently gotten into to replace his former doubling on bass clarinet. He sounds great on it. John plays some very appropriate and accomplished vibes as a key melodic and harmonic presence with Matt or in a solo context. His percussion and hand drumming give the music an additional sound that varies the proceedings nicely.

Throughout there is a great respect for the compositional Monk, due attention to the melodic essentials and a harmonic straightforwardness or an expansiveness as they feel it. It all works beautifully well and shows what two very inventive musical voices can produce when they look at Monk's music in an open-form way.

I am impressed with the outing. I would love to hear them do something like this with a rhythm section next time, but the music speaks for now very articulately without it.

Matt and John have their full artistry on display. The results will absorb and move you. Very recommended listening!