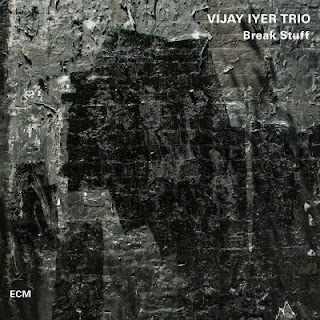 One thing seems clear to me this morning. That is that pianist Vijay Iyer does not care what is expected of him as a leader of a modern jazz piano trio. "I'm interested in how things grow when no one's forcing them to," he says. That means he and his trio give latitude to the inner muses within them. And those muses are driving the trio in various directions that are unexpected and original.

You can hear that in the latest outing, Break Stuff (ECM B0022567-02). He and his partners Stephen Crump on the double bass and Marcus Gilmore on drums are going somewhere, an original set of places. There is a looseness much of the time, coupled with polyrhythmic feels, minimalist openings in the firmament, sometimes with seemingly more than one tempo active, linear expansions on thematic, harmonic, and rhythmic elements, Strayhorn's "Blood Count" and Monk done in ways nobody else would think to do, original structures that can cook or they can clean the counter of pots and pans, as they feel it.

It is easy enough to say that Vijay's South Asian roots give him a special feel for rhythm. And something African in feel, too. Now that may be true but how that works out with his trio nowadays is not in any way automatic. There is a subtle channeling that all three are in on and it is very original.

An outstanding album, this is. They are touring the US February 19th through April 11. Eugene and Portland, Oregon, are the starting points, then New York, Albuquerque, San Francisco, Chicago and Boston. Check the net for more info. They are into something definitely "progressive," so now is a good time to hear them. And grab this disk!