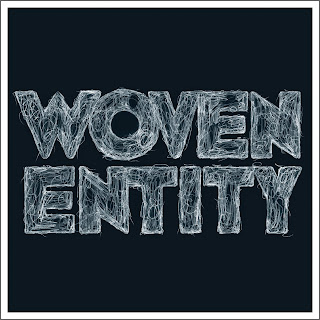 Music that transcends borders may be a little harder to write about than music that doesn't. Part of that has to do with giving the reader an idea of what she/he will hear. Sometimes "like Brainiac, only with more hair," to quote Captain Beefheart, may sound great but may not be helpful.

That is the situation with the London-based outfit Woven Entity, enjoying their first release, which is self-titled (Babel Label BDV12123).

It's freely improvised music that owes little to jazz per se yet has a more DIY approach than you might hear in more formal new music settings. It is a quartet with a percussive orientation, which means it can groove with pulsations of various kinds and ordinarily does.

Who are they? Lascelle Gordon is one of them. He started as a DJ in London, graduated to a number of bands in avant rock and improvisation, and now appears before us as a key member of Woven Entity. He plays percussion and a battery of miscellaneous instruments here.

Patrick Dawes plays percussion and has been around in various contexts prior to Woven Entity.

Paul May nails things down on drums. He's played with pianist Carolyn Humes and been a part of the electro-acoustic improvising trio Sonnamble, Elvers.

Peter Marshall is on bass. He's played with Lol Coxhill, Paul Rutherford, and Robert Dick among others.

That's the lineup. Now what do we get? This album concentrates on out grooves that have some tangential relation to dance music, but in fact are far removed from it. There is a bit of turntabling, some electronic and electro-acoustic colors, bass anchorage and multi-instrumental ensembles with the emphasis on percussion.

More than that, there is the sense that the whole is ever-shifting and permeable. They go to various zones with freedom and some lock-step tribal sense. They excel at something that is at this point very much their own. Think of Zappa's "Son of Monster Magnet" only with all these years intervening and a more dedicated sense of structure-in-freedom and you might not be so far away from what this is. Also there are moments where one is reminded of the Art Ensemble of Chicago in their percussion groove moments.

It is good. It is evocative. It is non-normal in a very avant way, yet there are plenty of foot-tapping episodes to guide you through. I like it! You might as well.