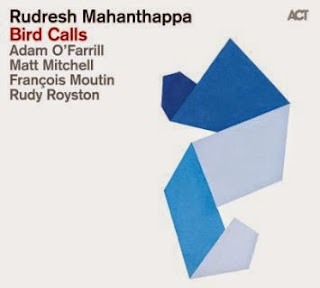 Rudresh Mahanthappa, Vijay Iyer and Rez Abbasi have in common their roots, one way or another, in their South Asian heritage. They for a time came together in various excellent lineups but at present all three have established separate identities with their own bands. Alto saxophonist-composer Mahanthappa, Iyer and Abbasi all have been producing some excellent work, and now we get a chance to hear Rudresh in full-bloom with his own quintet on the new CD Bird Calls (ACT 9581-2).

It is music of a rather astonishing vitality and in a very far-ranging way a tribute to Charlie "Bird" Parker. The album alternates between a series of clarion "Bird Calls" (1-5) featuring some scorching Mahanthappa alto, and a series of compositions that utilize musico-structural frameworks from Parker-associated compositions ("Donna Lee," "Now's the Time," "Parker's Mood," etc.) but makes of them things entirely new. So much so that unless you are alerted to look for Bird underpinnings you may be altogether unaware as you listen.

And to me that's the best kind of tribute--where you move the music along into the future rather than revisit the rote past.

Rudresh's playing by now is something pretty extraordinarily dexterous and accomplished. He has developed his own virtuoso saxophony that owes to Bird the swift flight over harmonic structures but indeed flies on its own two wings.

The band is excellent. Both Adam O'Farrill on trumpet and Matt Mitchell on piano can match Rudresh in note weaving prowess yet remain themselves, too. Francois Moutin on acoustic bass and Rudy Royston on drums give the band strong foundations and drive the music forward in swinging straight-eighths momentum more than a triplet-inflected one. The rhythmic drive of the whole band does not really sound rock-oriented as a result. And perhaps that is an aspect of the South Asian rootedness of Mahathappa's way.

In any case this is devastating music. Rudresh's virtuosity and consequently the entire band's is not about velocity for its own sake, but most importantly, it is a velocity that expresses musical content--much more, that is, than the scalular exercises some artists out there can fall into. As with the virtuoso jazz greats like Bird, the motion is directed toward a particularly inventive musical expression. Mahanthappa has fully flowered in this path and the band, excitingly, has taken on the Rudresh approach as its own, so that you get one unified, exhilarating style of expression.

Bird Calls is as much a call to the future as a look back. It honors Bird by NOT imitating, but building atop.

A marvelous recording! Be sure to listen to this one.