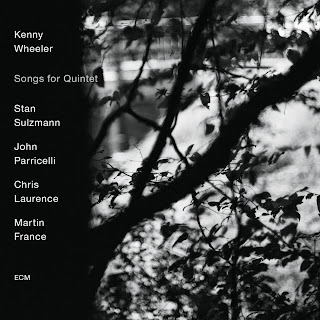 The passing of trumpet-flugelhorn-composer-bandleader Kenny Wheeler recently marked the loss of a major figure in the jazz of the later 20th century. He was a rather rare artist who could and did sound completely at home in the more avant camps (such as when a member of Anthony Braxton's celebrated quartet years ago) and in the tonal, changes-oriented contemporary jazz scene. He excelled in both worlds.

As if to remind us of what we will miss, his last album is out. Songs for Quintet (ECM B0022443-02) gathers together a nice grouping of mutually compatible players and sets them loose on some excellent Wheeler songs. They cover remakes of some older classics, such as "Old Time" and "Nonetheless," plus some very attractive new ones.

The band has a sound in very much the later Wheeler style, and if that sound is also a classic ECM sound, do not forget that Kenny helped very much to shape it with his lyric and open rhapsodic yet bittersweet style. Stan Sulzmann on tenor saxophone, John Parricelli on electric guitar, Chris Laurence on double bass, Martin France on drums make up with Wheeler's flugelhorn the complete unit.

They play each number and go to the soloing with an assuredness and poise that knows what Kenny is about and gives lyrical strength and heat as it is abundantly, alternately called for. Kenny still sounds very good here and it is of course with sadness that we realize we will not hear that beautiful horn playing in person again.

But we do have his impressive body of recordings. . . and this final one, in every way worthy of our rapt attention, a final kind of tribute, and a goodbye.