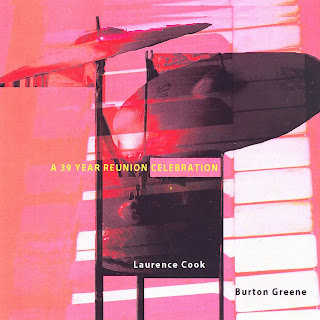 As Eric Zinman's liner notes to the album at hand explain, Paul Bley introduced drummer Laurence Cook to pianist Burton Greene in 1968. They hit it off musically and made some excellent sessions together with Mario Pavone on bass in the next couple of years.

Now 39 years later they reunite thanks to Zinman on a session titled appropriately A 39 Year Reunion Celebration (Studio 234 011).

Laurence has always impressed me as a kind of "thinking person's drummer," a free player who chooses his notes wisely and provides a very creative backdrop for free ensemble explorations. Burton it goes without saying has for a long time now prevailed as one of the new thing's pioneering pianists and an artist who continues to grow and expand his compass, year after year.

The two together in this 2008 Cambridge session are in a most inspired mode. Obviously the intervening years have done nothing to dampen their mutual musical compatibility and it shows in the way they interact. Laurence plays the drums as a modern painter wields the brush (and in fact he started as a painter), deliberate yet open to the spontaneity of the creative moment, sensitive to the drums in front of him and their potential, patiently drawing out the sounds in conjunction with Burton's varied and expressive creative stance.

And Burton sounds as good as ever, perhaps a bit more reflective now than when he first started out, not afraid to work in tonal realms but ever the abstractionist at heart, giving weight to each episode, drawing from other's compositions as well as some of his own, and just going it spontaneously with Laurence when that seems right.

The meeting turned out, not surprisingly, most opportune and fortunate. This is some of the finest recent work from either of them, worthy of listening to closely and often. In short it is a winner! Encore!