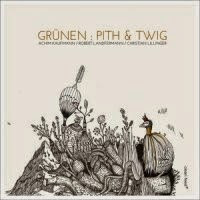 The piano trio in the avant free-new music realms of jazz has shown itself to be a unit that continues to be quite conducive to all kinds of interplay. We have a prime example today in the distinctive trio of Achim Kaufmann on piano, Robert Landfermann on contrabass and Christian Lillinger on drums. The album is Grunen: Pith & Twig (Clean Feed 311) and it's a good one.

These are players operating at a high level of abstraction. There are compositional elements by Kaufmann or Landfermann, and four collective works. The elements can be readily recognized at times, but just as often the improvisations and the compositional structures are so well-integrated that it is not an easy thing to separate the two.

And part of that has to do with the close interactions the trio have developed. Often enough they are as a kind of three-headed organism, each doing something so complementary to what the others are doing that they meld together into a single sound-canvas. This is a trio quite adept in fusing jazz-free and new music soundings.

They have worked out explorations in sound color born of various ways of producing conventional and unconventional sounds out of their instruments--the piano with various preparations and ways of altering the strings as well as straightforward soundings; the bass coming forward with unadorned pizzicato, with robust bowings and harmonics; the drums with full use of kit sonorities and additional sound producing objects, such as a bow for the cymbals, etc. It is not just that they produce an expanded sonoric horizon, of course, but how such things can work together in new music pointillisms or forward driving free group soloing.

They do not fit neatly in a Bley, a Cecilian or a new music zone, but more or less straddle all three influences in oblique and highly productive ways to get their own vibrant blend. It is uncompromisingly avant music that works very well because they are eloquent "speakers" of the language and do not fail to vary the mix and give us an untiring movement across terrains both somehow familiar and yet newly traversed.

A fascinating disk. It will appeal to those who seek a musical abstraction that is both exhilarating and well measured. Bravo!