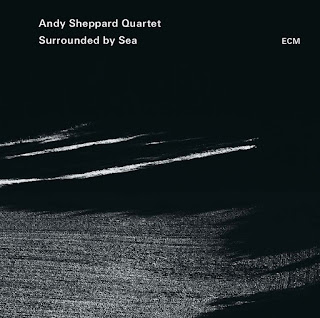 Carla Bley a few years ago remarked in an interview that she decided to bring tenor-soprano artist Andy Sheppard into her band "because he didn't sound like Coltrane." She was looking for a different sound and Andy was well along the way to developing it.

With his third album, Surrounded By Sea, (ECM 2432 B0023141-02) we hear the Sheppard approach in full bloom. On it we get his quartet mapping out an atmospherics squarely in the ECM jazz camp, not concerned so much with vivid torrents of notes or ultra-expressivity as with a mostly quiet, lyrical spaciness that may well remind you of Jan Garbarek albums in the classic phase, only Sheppard does not mimic Garbarek so much as go his own way. He has plenty of technique and can travel with it, but the emphasis is on a sort of rhapsodic, cosmic sound.

The band is a solid one, with that ECM headroom paramount. Eivind Aarset on electric guitar gives us ambient envelopes of misty, far-away harmonies and dreamy noting. Bassist Michel Benita has the open full tone and improvisational exuberance of a Charlie Haden and/or Arild Andersen and some of the bowing presence of a Miroslav Vitous, but all harnessed to the original approach of the quartet. Sebastian Rochford plays an appealingly loose style of drumming that fits in very appropriately with the musical objectives of Sheppard.

The Sheppard compositions set the tone and mood for each number. What we get is a very listenable contemporary ECM offering, well in the tradition of the label but different enough to hold its own as a worthwhile addition. Bravo.