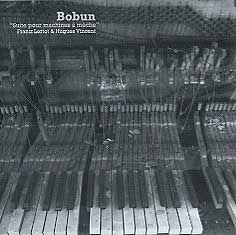 The European world of new music improvisation has grown to rather vast proportions in the last few decades. Happily I get a fair amount of it to review and today's offering is a very good example. It is a duo called Bobun, with Frantz Loriot on viola, Hugues Vincent on cello, both making use of "objects" either as elements in prepared fashion or supplementing the sound world as a whole. The album is titled Suite pour machines a meche (Creative Sources Recordings 215CD).

Each of the six sections of the suite has a particular aural identity, the first movement double-stopped dissonant blocks of continuity, the second prepared jabs of sound, and so forth.

What impresses me about this recording is its uncompromising avantness but also its rather rigorously defined aural breadth for each segment. "Extended techniques" are the order of the day much of the time, and each movement has a clearly defined sound world that gives the listener a shifting set of universes.

It is in the "tradition" of new music avant improv that goes back of course to the early-to-late '60s in the pioneering work of Il Gruppo, MEV and AMM. There is an expressiveness at times that relates to "free jazz" but mostly it is highly abstracted. You would be hard put to find anything in the way of a jazz vocabulary in this music, and of course that is deliberate.

I must say that Bobun has a constancy and expressive effectiveness that puts them at the forefront of recent explorations of this sort. That doesn't mean that it is an accessible music. It is hermetic instead. Those who are avant-initiated will be rewarded by close listening; those unfamiliar with the more extreme new music improv may be converted if they take the sound worlds seriously and devote some time to familiarizing themselves by repeated exposure.

It's a very worthy example of abstract outness!