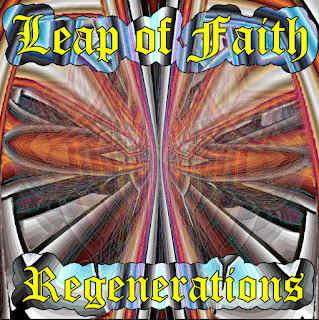 Leap of Faith is the name of a collective free improv outfit operating out of New England. Regenerations (Evil Clown 9036) features two substantial free-form excursions that capture the collective in two incarnations. Throughout PEK is on clarinets, saxaphones, bassoon and voice, and Glynis Loman is on cello and voice.

For the 41-minute title work "Regenerations" (recorded in 2015) they are joined by Steve Norton on saxes and clarinets, and Yuri Zbitnov on percussion and voice.

For the 38-minute, four-part work "Alternate Tales from Linear Combinations and Transformations" (recorded in 1996) they co-feature Mark McGrain on trombone, Craig Schildhauer on bass, Rob Bethel on cello and Forrest Larsen on viola for the first two parts, Sydney Smart on drums (for part one) and Laurence Cook replacing him for parts two and three.

Both works are high, full-bore free improv spontaneities that pay close attention to timbral sound-color shaping as well as freely expressive collective improvisations. Each shifting grouping of instruments gives rise to color spectrums alternatingly bright or impastoed, clustered or speckled depending on the moment.

This is less an individual solo-oriented music than a collective endeavor. Sometimes a group of instruments and occasionally a single instrument is more in the foreground than others, quite naturally, yet the end-effect is of group sonics.

This perhaps is not for the timid listener. It is uncompromising in its overall thrust. It creates its own world and you fit yourself in as listener well or not depending on your predispositions. In other words, this is free music of a distinctive sort, well paced, serious, advanced in its own way. It is very good indeed. If there is a New England school of free music this is a vivid part of it. Recommended!