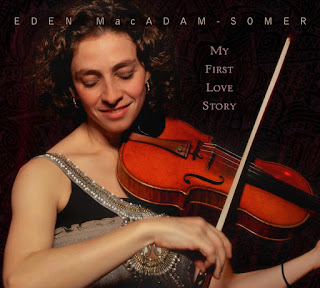 Some things are so different one has to gather thoughts before writing. Violinist-fiddlist-vocalist Eden MacAdam-Somer has that about her music. She is a violinist of high caliber, with classical training and a virtuoso slant, but she utilizes that technique towards her own adaptation of the folk fiddle style. Violin and her vocalizing are the sole focus on her album My First Love Song (A-Side 0002). She is an artist of real musicality. She is a faculty member at the very demanding New England Conservatory, so that tells you something.

But teaching or no, it is the originality of her approach that makes this album something special. There are her own original pieces and their are her very unusual folk-fiddle and vocal adaptations of things as diverse as Ellington's "Jump for Joy" and the perennial ballad "Barbara Allen," the latter done with almost a North African bluesy folk feel.

How it comes out is the everything to her music. She sings well and can get lyrical and/or rawly folkish and the violin playing follows suit. But then you hear influences of contemporary classical and early music too, so it's uncanny.

What intrigues is her combination of influences and how she puts them to rather unprecedented personal use. Her settings of Rumi poetry are striking, both contemporary and rooted, and the same could be said for the rest of the program.

She evokes American folk strains directly and obliquely at times. But it is the very special way she has of doing so that puts her in a company of one.

It all clicks for a moving result. There is nothing quite like her out there. I do heartily recommend you hear her! Get the album.

Posted by Grego Applegate Edwards at 5:26 AM