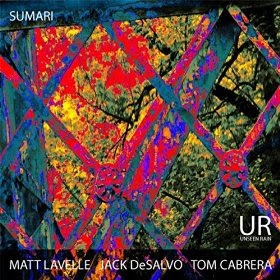 There are so many excellent modern and avant jazz musicians headquartered in the New York City area today. It confirms the status of New York as a jazz capital of the world, certainly, yet there are fewer and fewer venues to play in. It becomes all the more important for lovers of the music to get to the gigs and show support, and of course buy the CDs.

Three New York figures come front and center as very good examples of New York being now on the album Sumari (Unseen Rain 9962). On it we have the trio of Matt Lavelle on trumpet, cornet, flugelhorn, pocket trumpet and alto clarinet, Jack DeSalvo on mandola, cello and guitar, and Tom Cabrera on bodhran, tar, riq, doumbek, bass drum and miscellaneous percussion.

This is vibrantly eclectic avant jazz with world influences and a flowingly harmolodic sense. Matt plays the trumpet etc. with a mastery that shows an encompassing of the tradition and the essence of the moment. He has much to say and he comes to say it eloquently on the set. There are especially interesting tonal qualities he gets from alternating fingerings on notes, creating timbral and microtonal openings that are quite stimulating to hear. His switch from bass clarinet to alto clarinet recently has inspired him to play some of his very best reed work here as well.

Jack on his battery of instruments lays down foundational sounds that sometimes function as a double bass might do in such a trio setting. Other times they function as a second solo voice. And sometimes as a sort of "world" riffing instrument. He sounds just right here.

Tom similarly gives us rhythmic drive and freedom that functions sometimes in the role of the "drum set," other times with more overtly world connotations. He is key too to the success of the date.

What's nice about this one is the very together qualities of the trio as a whole. They are free yet they also have a world-homogenous quality to them. Matt plays some of his best music on disk. Jack and Tom create the varied and creative framework that makes it all work.

I am very happy to hear this one. The trio comes at us with strength and ideas. It all works. It's all very New York, which means there is the local and the universal all wrapped up into a very "now" music. Excellent!