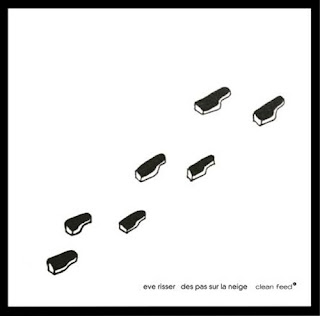 There is a growing sector of music makers who don't always follow the expected avenues of avant expression. The music veers towards "new music" rather than "free jazz." Yet there is an immediacy, an improvisational strain that places the music outside a formally composed realm.

Pianist Eve Risser gives us something excellent in this betwixt genre on her solo album des pas sur la neige (Clean Feed 323). She excels by creating an adventurous sound universe inside and outside a specially prepared piano.

What makes the music so interesting is her combination of repetitive ostinato elements both together in groups and with motifs which tend not to repeat. The ostinatos are subjected to development and change and the general dynamic is one of build-up and variation.

All of it has a sort of meditative openness, an organicism, a natural processual sound that shows Ms. Risser's fertile musical-conceptual imagination at work. With the very varied sound possibilities the music can at times feel linear, at other times like a slowly spinning mobile.

On the final segment she produces a sustained drone somehow (it sounds electronic but may well be produced directly on the strings?) and the music builds upon that, eventually creating rhythmical asymmetries overtop. With patience you hear a world unfold which is a very personal one, fascinating to behold.

There is a hypnotic quality to the music that has perhaps a more subtle fragility than minimalism per se and an open processual variability which reminds a bit of the radical tonality of some of the composers on the Cold Blue label (see my Gapplegate Classical-Modern Music blog for more on that). Yet there is an improvisational spontaneity, too.

This is not your typical avant album. It thrives in the interstices between improvisational and new music realms in a solo piano tour de force that takes close listening to appreciate. If you expend some time and effort the music opens up to you.

Eve Risser has something to say. Hear her by all means.