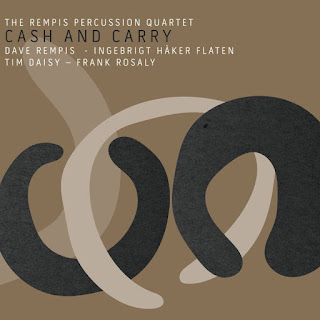 Dave Rempis and his Aerophonic label have been giving us some excellent Chicago-style avant jazz improvisation. The present-day Chicago style is as contentful and distinctive as deep-dish pizza, I suppose you could say. The Dave Rempis contingency gathers together some of the best players and opens up special territories of sound with every new release, it seems.

The Dave Rempis Percussion Quartet continues where the earlier Aerophonic releases leave off--in this case with two long cuts of live music from Chicago's Hungry Brain club, featuring Dave on alto-tenor-baritone, the busily significant bassist Ingebrigt Haker Flaten, and two of the best drummers active on the scene, Tim Daisy and Frank Rosaly. Cash and Carry (Aerophonic 010) is the title of the CD.

This August 31, 2014 set celebrated ten years of the group's existence as it also marked the end of that year's Chicago Jazz Fest, so that on hand was a crowd of advanced jazz lovers who migrated from the outdoor festival to the club.

Judging by the recording, the crowd was treated to some superior music that night. All four are in full-bore expressive mode. Dave is on fire and has a great deal to say, Ingebrigt plays with much authority and imagination, and of course Tim and Frank give us the freewheeling thrusts of power and subtlety we expect from them, only doubled, so to say, by their dual generation.

The open freedom of the two lengthy, in-the-moment performances has everything to recommend: solo excellence, group dynamics and interactions at a high peak, plenty of ideas and that special something you get from dedicated avantists when everything clicks.

If you don't know Dave Rempis well Cash and Carry is an excellent place to begin. Those who already dig Rempis and the new Chicagoans will find this one essential. Yes!

Posted by Grego Applegate Edwards at 5:47 AM