Giovanni Guidi Trio, This is the Day 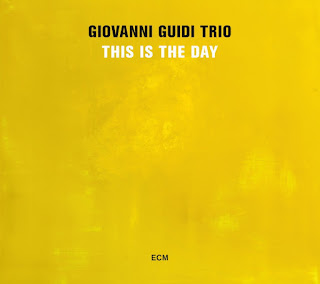 When it comes to a highly lyrical piano style in jazz, everyone knows Keith Jarrett and his special place. His popularity is enormous and ongoing. Yet he never was the only one to work in a lyrical vein. Steve Kuhn, Paul Bley, McCoy Tyner and many others might be be named for their lyrical side, going back also to Bill Evans and ultimately many of the bop master pianists when in a ballad mode, Bud Powell and all the rest. Not to forget the Monk of "Ruby My Dear" or even "Round Midnight."

So if we find pianists of lyrical bent practicing today, we should not automatically group them into a Keith Jarrett school. Giovanni Guidi and his trio and their recent This is the Day (ECM 2403 4709271) is an excellent case in point. This is supremely lyrical piano music in an well-knit trio context, yet Guidi does not sound like Jarrett, really. He has most definitely his own way and the album gives it to you in a large, ravishing dose.

Giovanni is joined by Thomas Morgan on double bass, who has a sort of post-Haden folkish profundity-in-simplicity to his sound. Joao Lobo plays drums with the sort of sensitivity Guidi's music demands. Together they make for an excellent meld.

Most of the material was written by Guidi and it is very warm and tonally direct. Joao contributes one and there are a couple of standards. "Quizas Quizas Quizas (Perhaps Perhaps Perhaps)," the Osvaldo Farres song, sounds somewhat surprisingly just right for the trio. I say surprisingly because the Latin song repertoire is not often addressed and Guidi gives you plenty of reasons why that should be less the case in his well-considered version.

The whole album has a singingly direct quality. It may be music that is very accessible to the general listener. I believe it is. But it is that not at the expense of artistry and finesse, of which there is a great deal to be heard here. In short Guidi has the potential to be listened to and liked by many, but he is a real artist nevertheless. And there is never anything facile or manipulative about the music. It is Guidi without compromise. Yet his way will appeal to all kinds of people, I think.

He and the trio can be freely loose at times but ever tonal, mostly diatonic, modal, primal and emotionally direct. It's an album that I have been drawn into happily from listen to listen and come away from it with a desire to hear it again. To me that is a high recommendation of self-to-self. And so I pass along that recommendation!