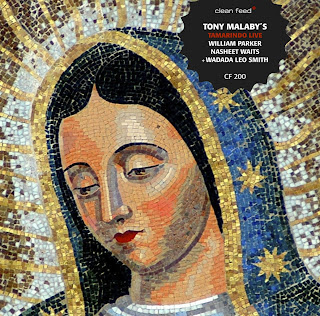 Soprano-Tenorman Tony Malaby has been getting around much of late, appearing as a sideman or co-leader on quite a few dates, and putting together some very worthy sides as a leader. I'm now catching up with his latest, out a month or so, Tony Malaby's Tamarindo Live (Clean Feed 200). It certainly has clout and brilliance aplenty. There's Tony, the bass master himself--Mr. William Parker, a drive-and-bash specialist in drummer Nasheet Waits, and one of the most creative and prolific trumpet wielders active today, Mr. Leo Smith. "OK," you might say, "You don't need to say anything more." Ah, but words-r-us here, so I will go on.

Tamarindo isn't just a gathering of some heavy cats, an all-star avantiana. No. It's the ever-shifting variety of combinations and moods that makes this music especially brilliant. Trumpet and bass have a moment to reflect, then drums and trumpet give the moment a little more linear expansiveness, then sax-bass-drums get kicking, and on from there, to give an example.

Each player has something good to say, the ideas flow, the scene changes, something new pops in. It's a cliche to say that the whole is greater than the sum of its parts, and it is also not entirely true. The sum of the parts of this quartet date are great to begin with and nobody becomes something other than who they are as players. Yet still there is some kinetic transformation that takes place, as in any great group improvisational moment, that brings the music onto another level. It happens here frequently.

I recently heard a tape of Coltrane practicing "Oleo" from around 1956. It was fascinating. Ultimately though he was running some ideas through with a thought to what ways around the changes he could devise. Hear him do it with the classic Miles group and there's much more in the way of emphatic speech-making going on. Tamarindo caught live is about the same thing. These are heavy cats speechifying, making musical statements in a collective zone, rather than kind of mumbling through some various ideas as one might do in practice.

And the opposite side of the coin is when players become too concerned with what an audience expects them to do, so that playing in a live situation becomes almost a matter of them playing at playing themselves, each playing a role as an actor that represents himself, but is not actually that self. Perhaps some of the moments of JATP have that quality on occasion, and I think it is not ideal for the best improvisation.

Tamarindo Live has neither of those tendencies--tentativeness or too much of a meta-self-awareness (perhaps a fancy way of saying that somebody is "hamming it up.")

The point though is the four masters that make up Tamarindo on this disk are making definitive collective statements on some un-expressible subject. They may repeat themselves (as a musical way to proceed), they may backtrack or "change the subject," but what they are doing has conviction, pacing, eloquence and drama. And I believe that great improvisation, free or otherwise--whatever that might mean, has those qualities. All four of these players have been musicians to watch for a long time. When they get together as Tamarindo and selected other gatherings, they are THERE. Watch for some other cats; Malaby-Parker-Waits-Smith are doing what you were watching for in the first place!
Posted by Grego Applegate Edwards at 5:34 AM