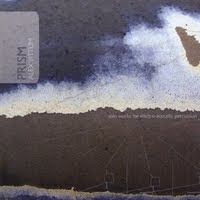 The drum set is not just that noisy contraption that disturbs parents' peace of mind for years at a stretch with barrages of cracks, crashes and ba-booms (and I must admit I was guilty of doing that to my folks while growing up). It is of course a MUSICAL instrument, capable of holding its own (in the right hands) with the violins, pianos, cellos and the rest for toneful invention.

That this is so can be heard especially clearly in drummer-percussionist Alex Vittum's album for traps and electronics, Prism (Prefecture 003). There are eight compositional-improvisational vignettes on the record, each involving singular duet-like excursions with Vittum on drums-percussion in conjunction with interactive electronics software that allows for a dialog, a live give and take between "man and machine."

It's the sort of thing that could sound tentative or unfocused. Prism most assuredly does not. There are times when electronic envelopes of tones project a legato wash that is punctuated by drum phrasings of a sound color sort. Other times there is pulsating interaction between the electronic sounds and Vittum the drummer.

Electronics of course can produce sound complexes that are very complex and thickly layered like an orchestra or more chamber-like in dimensions. Both possibilities are successfully engaged on Prism, as are varying stages in-between.

Whatever the density however, Alex shows himself to be a very creative and sensitive player who thinks through his interactions with a subtle virtuosity and a keen ear for the wash, the speech-like utterance and the rumble of power.

I might venture to say that Mr. Vittum has learned a thing or two from the experimental ventures in drum-percussion-electronic music made since the early sixties and he refines what can be done to a point that here all is rather deliberate and nothing sounds tentative. He seems to know what he is about and proceeds to create some very impressive sound poetry that brings the drummer into a more completely musical realm than he has sometimes been in during the past 100 years.

Prism is on the whole a most remarkable achievement. Listen and you will gain a new appreciation for the drummer-as-musical-visionary. This is a kind of concerto for drums and electronics as it is also an extended improvisation in the advanced sense of the term. Listen and enjoy!
Posted by Grego Applegate Edwards at 5:36 AM