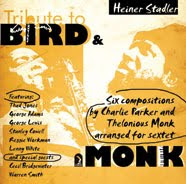 I keep coming back to Ken Burn's jazz series because it towed a particular party line (musically speaking) that I have disagreements with, and because it reached so many people who otherwise would not have gotten some kind of comprehensive overview of jazz in its 100-or-so-year history. (That's good, but that also means that a particular viewpoint was portrayed as THE view and that might not be good.) There was a point in the series where the question was raised about jazz in the '60s-'70s. The implication was that perhaps there was something "wrong" with the jazz of the time because it wasn't extremely popular, that the albums didn't sell well. Imagine saying that, because J.S. Bach didn't get his music played in the European village get-togethers of his day, that the music must have been wrong. Some of the best music, I hope we all have learned by now, may not initially, or EVER be popular in the statistical sense. And some music, when you apply that yardstick to it, is going to be misrepresented badly.

Heiner Stadler's Tribute to Bird and Monk (Labor 7074) (originally titled Tribute to Monk and Bird), newly reissued, is a case in point. When it came out as a two-record set on the Tomato label in, what, 1978(?) it was not a best-seller. It was one of those records that somebody could say was "wrong." Perhaps a textbook case. It took a sextet (give or take) of some of the finest improvising musicians of the day (Thad Jones, George Lewis, Stanley Cowell, Reggie Workman, Lenny White, Cecil Bridgewater, Warren Smith) and gave them Heiner Stadler's rearrangements-recompositions of six Bird-Monk classics. The arrangements took the music out. Bitonality, harmonic expansion, rhythmic fracturing and all sorts of other things were done with the original head sheets. And the musicians took Stadler's ideas and made of them some phenomenal jazz.

Well the music is back in print, on one CD, and guess what? It is not going to be a best-seller this time either. But guess what else? It IS going to be one of those albums I might play for someone who wants to know what was RIGHT about the jazz of the sixties and seventies, if they hung around long enough for me to get to it. This one is still RIGHT. The music of the '60s and '70s is still right, too.
Posted by Grego Applegate Edwards at 5:29 AM