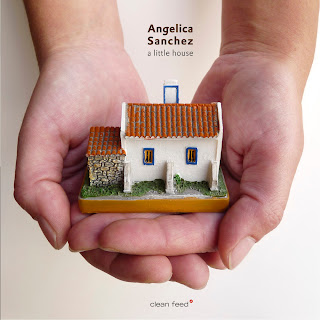 Every solo piano album by an improvising artist does not have to be the same as the ones by the rest of the bunch. I've found that some are more the same than others. I've found that Angelica Sanchez's debut in this realm, A little House (Clean Feed 206), is not only not the same, it's charmingly, substantially different. First off she is geared up to play music, not to show her jazz pedigree by playing old standards, bop chestnuts and generally putting on the jazz dog.

But first you want to know who she is? Angelica Sanchez. Well OK, you've gathered that. She is an up and coming artist who's been playing with Wadada Leo Smith, Phillip Greenlief, Paul Motian, Brian Groder, and others. She's a New-York based key specialist who is rapidly gaining credibility and good exposure in a town where that is by no means an easy thing.

The reason why that is seems fairly clear from the solo album. She plays freely improvised music with a heart and soul. There is whimsy in her pieces that add the toy piano; there is mystery in her inside-the-piano evocations; there is pure melodism in her searching pianistic essays. Well, no, not pure exactly, since harmony is there too, understandably. It's an honestly direct kind of improvising. Angelica pursues musical ideas and develops them. Those ideas are not at all in the realm of cliche.

It's avant piano with a human face, a human heart. It's piano music that exudes personality, a human being behind it all.

You end up after a few listens knowing that Ms. Sanchez has direction. She may not have totally arrived at her destination, which is only proper, but she is going someplace.

And while she is going there she has left behind an excellent example of solo piano musings. Very much recommended.
Posted by Grego Applegate Edwards at 4:32 AM