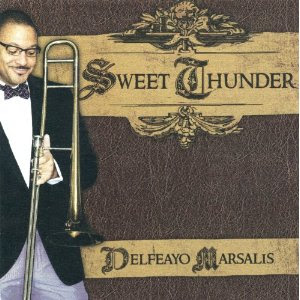 Duke Ellington's post Newport-1955 work for Columbia to me is one of the cornerstones of his output. The suite in tribute to Shakespeare, Such Sweet Thunder, first recorded for the label during that period, I rank high on the list of my Ellington favorites. So when I found that trombonist Delfeayo Marsalis had created a new version of the work (Sweet Thunder [Troubador Jazz 092110]) I was certainly interested, but had misgivings. The latter came out of my more than occasional disappointment with jazz repertory versions of masterpieces. Sometimes they just try too hard to sound like the original and fall short.

That happily turned out not to be the case, partially because the music does not attempt to be a carbon copy of the original version and, then, it does not fall short of accomplishing its aims.

To be sure, it IS a big band playing "Such Sweet Thunder." The charts have been altered, modified, partially to accommodate some extensive soloing by Delfeayo and his brother Branford, both of whom sound quite modern but also swinging and lyrical as needed.

It works and it does so because it has the immediacy of the present in the soloists and the classicism of the Duke-ian mode in the charts. It does not supplant or replace the original. It has enough going for it on its own terms that is can stand beside that original as an alternate version. And both are well-worth having and hearing.
Posted by Grego Applegate Edwards at 5:35 AM