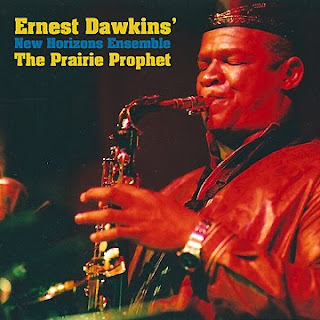 Chicago's Ernest Dawkins has been making some very goodly music for some time now (11 CDs so far). His New Horizons Ensemble has been a big part of the scene since 1978! On The Prairie Prophet (Delmark 598) Dawkins runs the mid-sized, seven-artist cast through in-jazz to out-jazz compositions that have plenty of latitude for the considerable improvising abilities of the players while emblazoning a distinctive stamp on the sound and thrust of the music.

This is a well-paced set, dedicated to the great tenor institution Fred Anderson, who passed away last year after a long and luminous career as improviser, mentor and owner of the famed Velvet Lounge, where Dawkins had the opportunity to work frequently, honing the long-running ensemble and their group sound.

And it's some group. There's Dawkins himself on alto and tenor, a force of distinction; trumpeters Marquis Hill and Shaun Johnson, good soloists and a burnished, bright "section" sound color; Jeff Parker on guitar, a man fully versed in the roots of his instrument and fully able to take it into orbital outness when called for; trombonist Steve Berry, one of Chicago's very best on that instrument; and the creative, brilliantly spontaneous yet team-oriented rhythm section of Junius Paul (bass) and Isaiah Spencer (drums).

It is not a contradiction to say that the right kind of band, one with a certain amount of free playing by first-rate new improvisers, can become ever more tighter in their freedom as they continue to work together. That is most certainly the case with the New Horizons Ensemble. There is no dead space on The Prairie Prophet. Solo spots are incisive, ensemble grooves are focused and hard-hitting, the free-er moments develop and move linearly from point A to point B in creative ways, and the compositional elements totally integrate into the performance, allowing breadth, latitude, and performative elements their due.

This CD is in many ways a bit of a masterpiece. It shows that Dawkins and Horizons are making some of the finest jazz coming out of Chicago today. And that in a city still central to the music!
Posted by Grego Applegate Edwards at 5:01 AM