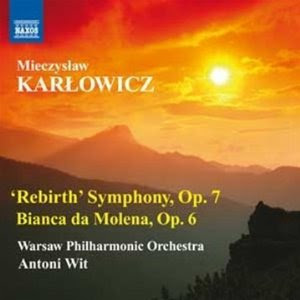 There's good reason why you probably have never heard of composer Mieczyslaw Karlowicz. He was on the verge of international recognition and full musical maturity when he was killed in an avalanche while on a skiing trip. Fortunately for us he had created a small but very interesting body of work in the late-romantic vein. His Symphony in E Minor "Rebirth", Op. 7 is one particularly appealing example.

We are again fortunate that Naxos is devoting a series of releases to his work. The latest is a stirring Warsaw Philharmonic reading of the Rebirth, with Antoni Wit as conductor (Naxos 8.572487). It is scored for a fairly large orchestra, yet unlike some of the works of his contemporaries it is relatively succinct, occupying a somewhat modest 45 minutes in an age where much longer works sometimes prevailed. Length does not equal breadth, however, for this is an ambitiously sonorous ode that says much in its presentation of inventive thematic material and its discursive development.

Perhaps the first thing that struck me as I listened: in an age where late Beethoven was often the model for the development of larger symphonic form, and composers Richard Strauss and Gustav Mahler were the pre-eminent (yet still controversial) symphonic voices of the era, the Rebirth Symphony manages to go its own way, not sounding particularly derivative of these luminaries. If there's a hint of Wagner in the Andante, and that of Tchaikovsky in the Allegro, it is a hint. For the rest we have a voice on the verge of full-flower, a symphony that deserves attention and adherents, in a performance that deserves our approbation. Like his contemporary Szymanowski, he was one of the leading young lights of the Polish musical rennaisance. Unlike Symanowski, he did not live to see the full realization of his creative potential. Nonetheless we can listen to this Opus 7 without the need to evoke hindsight, for it has much in the way of power and charm. It needs no apology or historical exegesis to win us over.

The disk has the bonus inclusion of his Opus 6, Bianca da Molena (The White Dove), two enjoyable movements of incidental music.

Recommended for all late-romantic symphony buffs and those interested in 20th-century Polish composers.
Posted by Grego Applegate Edwards at 5:37 AM