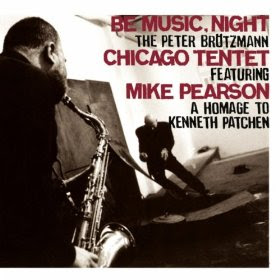 Peter Brotzmann's Chicago Tentet combines some of the finest avant improvisers out of Chicago and Europe. For a such a logistically and musically complex multi-member outfit they've had a rather long and significant life. And they still flourish today, as witnessed by their recent European tour.

We turn the clock back to 2004, and a Tentet gig recorded at Wall to Wall in Chicago. It was auspicious and fortuitious that the mikes were in place, the "tapes" running that day, because the resultant album Be Music, Night (Jazzwerkstatt 002) is a good one.

First of all there is a great line-up going at this point, with the titanically endowed reed configuration of Brotzmann, Gustafsson, Vandermark and McPhee (the latter on alto sax and trumpet), plus Jeb Bishop on the trombone. Then there is Lonberg-Holm on cello, Kessler on bass, and the duo drum-team of Nilssen-Love and Zerang. Mike Pearson appears in the guise of recitator, since Be Music, Night centers around the poems of Kenneth Patchen and a hommage to his work.

As is usually the case with the Tentet, there are ever-shifting combinations of instrumentalists, in this case accompanying and commenting freely upon Patchen's poetic texts. The band most definitely has at it during much of those sections where the texts lapse into silence. There are some thematically composed elements and some very powerful collective-free improvs.

This may not be the Tentet's greatest recording, but it is a most unusual one given the Patchen thematic center. Like all things Tentet it is challenging avant music that does not suit at all as background. It must be heard attentively or it will form a puzzling backwash to your everyday concerns. This is not meant to be everyday so much as it is meant to be beyond-the-day. It is the music of night, of that special quality of night where time is suspended and the darkness alternately sharpens and obscures site, of the night that reserves its special dispensation to sound, poetic sound. Of those special sounds of the night. Of the sound of the Tentet. Of the sound of Patchen's words.

You undoubtedly should have at least one Tentet album if you are a serious explorer of the avant improvisational present. This is a pretty good one to start with.
Posted by Grego Applegate Edwards at 4:50 AM