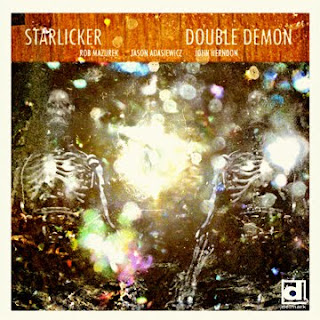 The trio Starlicker (as heard on their release Double Demon, Delmark DE2011) is not your usual line-up playing the usual sorts of things. First off the instrumentation is not at all the norm. There's Rob Mazurek on cornet, Jason Adasiewicz, vibes, and John Herndon on drums. What this means in terms of sound has much to do with how the band approaches what could be a somewhat quieter ambiance, especially compared with Mazurek's large ensemble Exploding Star Orchestra (see this past December's blog postings for a review of their last album).

Key here is Adasiewicz's hard-hitting, ringing chordal style on vibes, something he showed us well in his trio recording of several months back (do a search in the blogger search box at the top of the page to call up that review). He hammers and sustains chords with insistent rhythmic propulsion, something like classic McCoy Tyner comping from his harder-edged days, only it's the vibes involved and Jason goes about it his own way. This rhythmic-harmonic vitality and density allows drummer John Herndon to play a harder, dynamically dense sort of ringing kicked style. In turn Rob Mazurek soars atop the intense wash. So the result is a trio that projects with burning hardness, the opposite of a gentile sort of chamber jazz that could come about with this instrumentation. Everybody is playing flat-out HOT and they really tear it up.

The second factor, something always a part of the Rob Mazurek presentation is the quality and through-composed nature of his writing. There are very memorable themes and chordal-rhythmic motifs that permeate every number, giving the band a unified stance and a very recognizable identity.

Now that I've set this up for you the only thing left is for you to take over--and listen. That I most certainly recommend you do because this is a very hip set and it freely devastates as much as it demonstrates what a contemporary ensemble of this sort can achieve. And that is very much. Starlicker is yet another bright light on the Chicago jazz scene.

They are on the last leg of a US tour this month, hitting some key midwestern cities and concluding their travels with a return to Chicago and a final tour appearance there May 23rd.
Posted by Grego Applegate Edwards at 4:32 AM