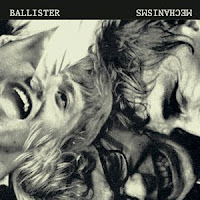 Ballister is the confluence of Chicago alto-tenor-baritonist Dave Rempis and the Europeans Fred Lonberg-Holm and Paal Nilssen-Love, the former on cello and electronics and the latter of course on drums.

Mechanisms (Clean Feed 245) puts the three together live at the Hideout, Chicago, in late 2010.

Fred Lonberg-Holm's cello in place of the expected double bass lightens up the texture of the music and gives more general frequency presence to what Fred is doing.

The group builds up energy that explodes in alto-cello-drums mayhem for the opening "Release Levers." "Claplock" tones it down and gives some space for Rempis's inspired saxophony, a phraser of stature, sound color master, post-Ayler, post-AACM wizard. Nilssen-Love reminds us why he is one of Europe's premier free-drummers while Lonberg-Holm gets some interesting lines going in his own right. Rempis returns for some lucid wailing. He doesn't always go where you expect and where he goes is something to hear. They get into another froth and Dave is in fine fettle. The final "Roller Nuts" kicks it up a couple notches with blow-out extroversions that will wake anybody up who has ears.

There is some very fine free sax trio music to be heard on Mechanisms. It says much about what sort of connection the three made that day--a synchronicity of a definite high order.