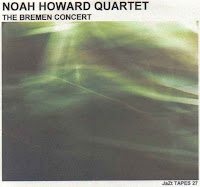 There is more than one Noah Howard, as students of his music know.

Today, though, we have Noah on alto in January 1975, with an excellent quartet of Kakashi Kako on piano, Kent Carter, bass, Oliver Johnson, drums, in The Bremen Concert (JaZt Tapes CD-027). It's an acceptable quality recording from a radio broadcast of a 40 minute set by the band. The balance is not perfect, the mid-range and bass frequencies a trifle muffled and boomy, but the performance is very good. Noah and band are in a Trane inspired vein from the start, with a version of "Ole," followed by a modal-centered blast off on "Pearl Stream".

"New Arrival" has a quieter, cascading, expanded key-centered cosmic thing going on, Kakashi sounding a bit like Alice Coltrane in John's later band and a ravishing, soaringly lyricial Noah in great form. "Ziki" has a "My Favorite Things" three-feel and Noah kicks off with his own handle on what a solo overtop of that can be.

It's fine music from a committed quartet and gives us a good look at the Noah Howard of 1975 in a particular zone. Once one gets used to the limitations of the audio source, one is in for some good sounds indeed.