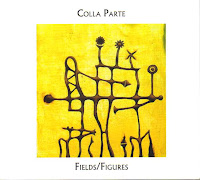 Colla Parte, "with the lead voice," is a nicely balanced trio that gave birth to their first CD last year, Fields/Figures (SubGeranium 56765). Daniel Barbiero (who played on Centazzo's Moon in Winter reviewed earlier) is on contrabass, Perry Conticchio mans a battery of winds, and Rich O'Meara plays vibes and percussion.

All three have facility and imagination playing in the free zone and all three work together well to create a wide variety of free chamber jazz moods and modes. That variety is advanced in part by the doubling: Rich accesses a modified drum set along with the vibes to in essence comprise two voices and Perry varies the group sound through his presence on multiple reeds.

Barbiero's arco work is especially outstanding; Conticchio's bass clarinet, sax and flute work does not mimic but rather proceeds from an inner source--his alto work is especially strong and reminds just slightly in thrust/sound of Braxton, but with an original sense of line; and O'Meara's presence on vibes is flowing and inventive.

The extensive jazz experience of the three show in the seeming ease with which they create spontaneous musical structure. The music is virtually always deliberate and well considered, with timbres, colors, densities and textures offering themselves as a kind of passing parade for the attentive listener.

It's a group whose most important work is no doubt to come. As it is this is some fine free music. I am told another release will soon be forthcoming. Bring it on!