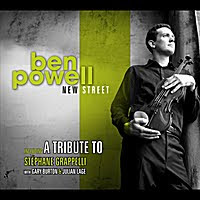 Ben Powell plays violin in ways that extend the post-Hot Club style of the late Stephan Grappelli. There's warmth, a generous vibrato, a capacious amount of technique and a rhapsodic projection.

On his album New Street (self-released) he shows all of this to good effect. The album divides into two interrelated halves. One is a violin-piano-bass-drums quartet playing originals and a few standards. Everyone is quite good, and in a modern vein, but Ben is front-and-center as the star attraction. He impresses.

The second half is made up of the Stephane Grappelli Tribute Trio: Ben, Gary Burton on vibes and Julian Lage on guitar. They play the piece "Gary," which was written by Grappelli for Mr. Burton but not played on record until now. Then there is another evocative Grappelli composition and a number that evokes his earlier Hot Club days.

Ben Powell comes off as an impressive artist. He can play a sort of post-Gypsy modern and he can dig deeper into the tradition, but he does so as himself, in spite of the strongly anchored roots.

This is delightful music from start to finish. Whether or not you have been a Grappelli fan for years, I think you'll emerge from listens to this album as a Ben Powell fan.

Posted by Grego Applegate Edwards at 4:52 AM