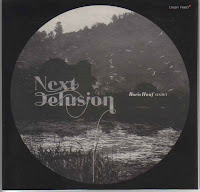 Some music takes time to absorb. I don't always get it right away. The Boris Hauf Sextet and their Next Delusion (Clean Feed 238) was one of those. I suppose that is because it is a sextet of an unusual sort, doing things one doesn't expect.

Improvisation is there throughout, and especially on the last track, but the overarching push is toward open compositional structures: long tones and chordal voicings, clicks and pops, multiple velocity jabs, and drums as color, and when they get going, as irresistibly anarchic barrages.

There's not a great deal of wind improvising in the traditional new jazz sense until the final section, where you get a cascade of three-horn energy blasts.

Once you understand the structural arch and compositional trajectory, you cease to expect something else and just sit back and let the sounds envelop you. And that for me was when I starting liking what I was hearing a good deal. It's an exercise in disciplined freedom. And it's very good!

Posted by Grego Applegate Edwards at 4:50 AM