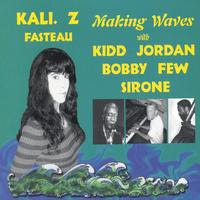 From time to time in the past months I have been covering some of the more interesting releases of Kali. Z. Fasteau. She is an multi-instrumental artist and music leader who deserves more recognition, and her rather extensive body of recorded examples equally deserves to be heard.

Today we have her 2004 release Making Waves (Flying Note 9010). It's a formidable four-artist lineup of Kidd Jordan on tenor, Bobby Few at the piano, the late Sirone on bass and Kali on synth, soprano, cello, drums, vocals and mizmar. The album is comprised of several sessions recorded in 2000 and 2004.

The flow of the music is fast-paced, thanks in part to the 15 relatively short to very short improvisations and thanks to the great variety of instrumental combinations and moods addressed. Not everybody plays at all times, and so there are varying configurations of personnel as well--with much in the form of a series of duet exchanges.

This is cosmic music, as you come to expect with Ms. Fasteau, free new improv of genuine interest.

Kidd Jordan sounds fantastic, as does Bobby Few. Sirone is a fine lower presence when he is in the mix, and Kali gives the music lots of texture and torque with her very appropriate synth work, her atmospheric electronically enhanced vocals, post-Trane soprano, skittering cello, very respectable free drumming and droning mizmar.

It's a fascinating, very listenable exploration of the free zones Kali often dwells within, with a few new twists besides. And this one has the added attraction of a miniaturization that makes time go by quickly. Recommended!

Posted by Grego Applegate Edwards at 5:06 AM