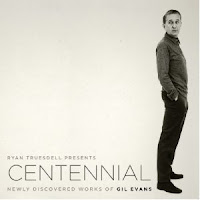 Ryan Truesdell's Centennial: Newly Discovered Works of Gil Evans (ArtistShare 0114) is a triumph of a new trend: the DIY public funded project. In honor of the master arranger's 100th birthday Truesdell hand-picked 10 of Evan's forgotten, unplayed arrangements tucked away in the Evans estate, assembled a crack jazz orchestra, got them ample rehearsal time and recorded this, a major new compilation of Gil Evans artistry.

It was a labor of love!

Half the music comes out of the Claude Thornhill days, including a 1950 arrangement of "The Maidens of Cadiz," prefiguring Sketches of Spain by many years, a version fascinating and worthy in its own right. There are sultry noir vocal arrangements, boppers, Gil's patented version of jazz impressionism, some excellent later-era adventuresome essays and a beautifully atmospheric version of Weil's "Barbara Song."

It's is a major Evans disk, a triumph, a delight in every sense. The band gets the arrangements honed to perfection and it's all pure Evans.

These are not afterthoughts or leftovers. They are masterpieces, miniature and otherwise.

Thank you for the selfless effort Mr. Truesdell, and thank you band! This is one to treasure.