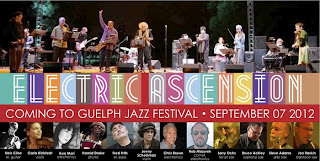 Coltrane's Ascension remains perhaps the seminal composition that came of of the jazz avant garde of the '60s. The Rova Sax Quartet has been one of the important forces in later avant jazz. They have formed the twelve-member group Orkestrova to perform Coltrane's landmark piece and they need your contributions to help with the production costs.

Specifically the Kickstarter campaign is to raise funds for a stand-alone concert video of a one-time-only performance of Electric Ascension at Guelph Jazz Festival in Canada on September 7, 2012.

Head on over to http://www.kickstarter.com/projects/1737726083/channeling-coltrane-a-concert-video-of-electric-as to find out more and chip in a few bucks if you can afford it.

Note: I very rarely including this kind of post on my sites, but in this case I think it's a very cool idea.

Posted by Grego Applegate Edwards at 10:28 AM